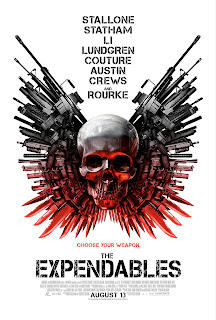 The Expendables has a lot of fighting, killing, running around and explosions. Unfortunately, it has much less plot, character development, and dialogue that makes sense. At 103 minutes, it feels very extended.

Director (of gang and movie) Stallone leads a group of mercenaries to some Caribbean island that's ruled by a mean general (David Zayas from Dexter) and an even meaner American (Eric Roberts). General also has a hot daughter. Stallone is offered $5 mil by Bruce Willis, but eventually goes and blows up the whole place (meaning the presidential palace, and likely, the nation's entire cultural heritage hosted inside it) for "personal" reasons. Schwarzenegger shows up for no reason, other than he's friendly with Stallone. There is even a scene involving the '80s action trifecta (Stallone-Willis-Schwarzenegger), which alone would be worth the price of the ticket; unfortunately, it is pretty clear that Arnie and Willis couldn't make it to the set on the same day, so the whole scene is completely fragmented and feels like some fanboy's montage sticking the three stars together. And the dialogue is simply inane, moving haltingly rather than smart-assedly. I'm not even going to go into the whole set of ideological problems related to a bunch of muscled guys going into random countries to blow things up.

The Expendables feels like a movie you'd run into on late-night network TV, only enjoyed (but then really enjoyed) if you're drunk. Or maybe stoned. Which is what Mickey Rourke looks like in the movie.
Posted by melisb at 23:07 No comments: