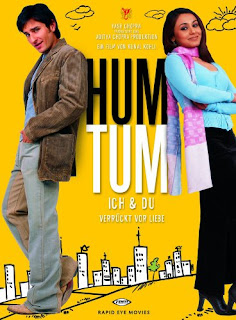 Saif Ali Khan is no Shahrukh, that we know. We just saw Salaam Namaste last week too, but I've been very lazy about the blogging. In any case, it's very difficult to focus on a Bollywood movie when one keeps on wishing it were a different male lead.

Just like Saif Ali Khan is a poor substitute for SRK, Amsterdam is a poor substitute for New York. And Paris. This is the story of a couple that meet on the plane flying from Delhi to New York with a stop over in Amsterdam, which they spend together. Their paths keep on crossing, until (guess what) they realize they're in love with each other, blah blah blah. They spend time in Amsterdam, New York, Paris, Delhi and Mumbai, but all non-Indian locations are shot in Amsterdam. That could be less conspicuous if they avoided landmarks like the Rijksmuseum or the Concertgebouw, but hey, anything goes when they're singing and dancing with cheerleaders in the park.

Also interesting take on a kiss, a widow finding love again and marriage out of wedlock - or not so interesting if you've seen enough Bollywood films: this only seems to happen if the couple is living outside of India.

As a final note, I'd like to remark once again (or maybe for the first time on this blog) that as beautiful as Aishwarya Rai is, Rani Mukherjee has by far the coolest (or hottest) voice in Bollywood.
Posted by melisb at 23:11 No comments: Links to this post