Spent most of the day indoors again, my cold is receding though. When I went out to the park at around 20:30, it was even more crowded than the previous days. people are celebrating, singing. There's a field hospital, the kitchen is running, and now there's a small library as well. Everyone is kind towards one another - apparently even on the subway. We went to eat something at Kitchenette on the square, the service, which is usually polite but slow, was kind, fast, and as odd as it sounds, gentle. They let people (and there are tens of thousands on the square) use their bathrooms, let them charge their phones and access free wifi. 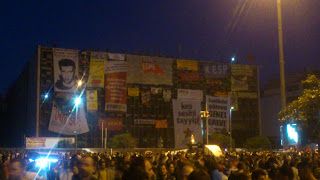 The facade of Ataturk Cultural Center is now covered with banners (see pic), which is a little worrying because this movement started from no particular political position, and I think it's important to keep it that way. With the PM out of the country, the media is now discussing the events, but they are still not reporting the ongoing violence in other towns such as Antakya and Dersim. A young man was killed in Antakya the other day, and following his funeral today, the protestors were attacked again. More recent and also very troubling news is that people have been detained for what they have written on Twitter – for “inciting crowds to violence.”


Another important issue is that the parliament was supposed to discuss the new Law on Nature, which was postponed. This law allows vast forest areas to be opened to construction – if it passes, the damage will grossly surpass the damage planned in the park. Granted, the park has a symbolic position, but this would be a disaster. You may know of the existing plans to destroy the environment in Turkey: 3rd bridge over Bosphorus, 3rd airport (to be the largest in the world), a channel parallel to Bosphorus, Hydro-electric centrals in ecologically sensitive areas, a nuclear plant on a fault line… Needless to say, public opinion is being absolutely disregarded in any of these projects.


That’s it for now, we’re hoping some kind of agreement can be reached before the PM comes back, his speeches do not help the situation at all…
Posted by melisb at 00:10